While deciding what part of the new vSphere product I wanted to write about, I was very tempted to go for the new uber cool features such as:

However, the more I used the beta, the more I realised the bits that I appreciated most were features that improved my day to day productivity and manageability of the product.

So with that in mind I have decided to focus a blog post on the improvements within the Web Client and the new Content Library.

The previous major version marked the downfall of the C# client with new features only being released in to the Web Client.  Unfortunately the feedback of the performance and layout of the Web Client was not the best to say the least with many doing all they could to resist moving over.

It would appear that VMware are listening and have done something about it.

Previous iterations of the Web Client irked people by its relative slowness to the C# equivalent. While I did not get too eat up about the slowdown, when working for any considerable time in the Client you did feel a sense of lost time.

Well VMware have spent some considerable effort on resolving the performance issues. The client certainly has more punch than the previous versions, with right click functionality more responsive and login times significantly improved

The interface has a new snappiness that didn’t exist in previous versions (even in the lab) and I found myself gravitating away from my old client in favour of the new way of working.

One criticism the Web Client faced was the amount of clicks it took to navigate around. The actions were very forward and back.

VMware have listened and introduced a Navigation bar at the top that allow jumping directly to each major area.

The right click menu has also been changed, with common activities now quicker to navigate to 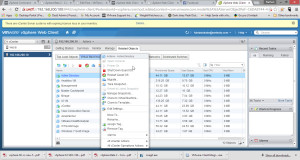 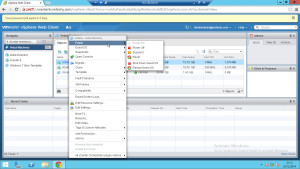 I love the tasks pane, it gives me a very quick overview of how tasks are running and how long they are taking. I especially like it when I am keeping an eye on any Horizon View provisioning tasks

Well its with great (selfish) pleasure that I can say its back in its old place. I understand what they were trying to achieve with the original change but I admit I do prefer it at the bottom of my screen.

The C# Client – It Still Lives!

We are going to have to let go one day, but it appears its not quite yet! A bug bear in the previous version was the C# client could not manage later H/W revisions causing many to leave their virtual vCenter on a earlier H/W.

Well the C# client has made it into vSphere 6, and it has been updated! It can now manage H/W versions 9 to 11. While there is reduced functionality, there is nothing that would stop you running your vCenter on the latest version now as you can see from the restricted features listed below

While the client is included in vSphere 6, it will not make it into any future editions.

To me, this is a great addition to the product. Content Library provides simple  management for Virtual Machine templates, ISO images and scripts which can then be synchronized across sites and vCenter Servers.

What does it do? Well the slimmed down version is:

In essence it takes all your usual ISOs, scripts and VM templates and stores them in a single location that is searchable from within vCenter. This can then be replicated to other vCenters to allow consistency of environments. I can imagine this becomes very useful for cloud providers!

The below image shows the content library within vCenter 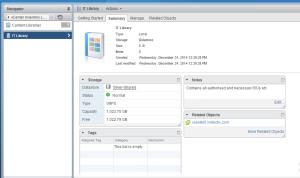 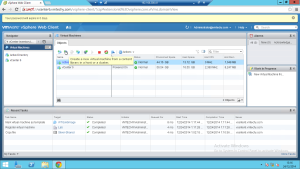 One thing I do like is that NFS is a supported location meaning that those with storage such as Netapp could get the storage savings of Dedupe as well as the single location to store files . 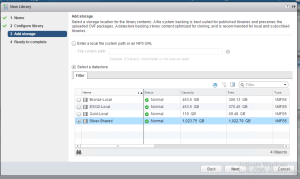 As the Content Library can be replicated across sites and vCenters, it means we can now provide a consistent ISO & VM Store across multiple sites and environments simplifying the IT burden on larger environments

I am looking forward using the final release and being able to use the uber fancy features in my design, but more importantly knowing that feedback does work and my job will completed that little bit quicker due to the great work done during the design and beta by VMware.